Venomous Drool is a character and villain in the television series, Fangbone!.

Venomous Drool is the most evil sorcerer in the universe! Drool lost his big toe – which has evil powers – so he sends his minions to get it back from Fangbone.

Drool was apparently born into the Mighty Lizard Clan, but due to his strange appearance he was tied to a wolf and sent out into the wastes of Skullbania. There he was adopted by two giant slugs, and as he grew he studied magic, eventually dipping his big toe-later known as the Crusty Toe of Fate-into a pool of pure evil which granted him immense power. He then attempted to conquer Skullbania, but his threat was great enough that the various barbarian clans united to defeat him. Defeated, Drool was dismembered and his various body parts scattered among the barbarian clans for safekeeping, though by some means he remained alive. Drool was eventually able to reunite most of his body and return, lacking only the Toe to complete his power.

He appears to be 7-12 ft tall and has pale green skin with a slightly long nose, and has yellow eyes with red dots, he wears a Velvet red sorcerer tunic with gold lining around the collarbone and on the sleeves and on the waist and also wears a helmet with bull horns and a small skull with a black tail on top it. 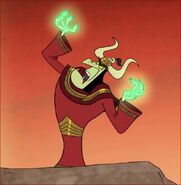 Add a photo to this gallery

Retrieved from "https://fangbone.fandom.com/wiki/Venomous_Drool?oldid=1114"
Community content is available under CC-BY-SA unless otherwise noted.